94 houses to be built on Nursery/Riding School site

Permission was granted on 9 September 2020 for 94 houses to be built on the site of Stuart Holder's Nursery and Shelley's Riding School, at the bottom of Heanton Hill Lane, near Chivenor Cross roundabout.

This plan, which has been around for some years, suddenly became active again when the North Devon & Torridge Local Plan collapsed following a Planning Inspector's ruling in Torrington in February. The site is outside the Plan, and it has always been North Devon Council's policy to prevent any development north of the A361 in this area, to protect the rising ground along the estuary.

However, without a Local Plan the Council's ability to oppose such plans is reduced. The outline plan was passed with a condition to provide detailed plans for some highways improvements required by Devon County Council, but these are minor and will not compensate for the increased traffic from 94 houses emerging onto the foot of a single-track lane with restricted, one-way access onto the A361.

In almost his first official act as Heanton's newly-appointed vicar, Rev Steve Painting captained his side to victory in the Annual Village-vs-Vicar Agricultural Cricket Match played on Saturday 18th 2018. It is now established that being a cricket fan is a pre-requisite for appointment to the role of Vicar of Heanton, Marwood and West Down.

After a 'bye' year in 2017, the tournament resumed with gusto, and the field was ready early enough for a pre-week practice session, which markedly improved some performances on the day.

Batting first, the Vicar's team ran up an impressive 122 runs in 20 overs, with three batsmen having to retire after reaching 20+ runs. Amazingly, the Village team then also had three retirees on 20+, but were just unable to overhaul the Vicar's total, finishing on 104 despite Andy Arend's spirited slog taking 18 runs off eight balls.

The new Heanton Challenge Cup was presented to Rev Steve Painting, the previous cup having been retired with the departure of Rev Iain Robertson to his new parish in Southway, Plymouth. 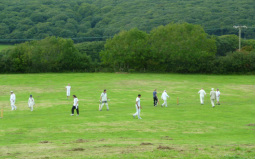 The first annual Heanton cricket match, played in Bumpsey's Meadow on 20 August 2011, saw a comfortable win for the 'Village' team captained by Steve Crowther, over Rev Iain Robertson's Church team. Both sides were packed with ringers, but it made very little difference to the standard of play which was generally agreed to be awful, on a surprisingly forgiving, if lively, wicket formed by the public footpath crossing the field.

The torrential rain that had fallen all week held off for just long enough to allow a 15-over game (it would have been 20 but everyone was out), after a barbecue expertly cooked by the massed Arend family at Eastacombe House. Tea was provided by the ladies of St Augustine's Church.